A recently renovated traditional-style Kyoto townhouse with over a hundred years of history, done with efforts to make the space into “one of the highlights of a visit to Kyoto.”
Traditional craftsmen and long-established shops work together to create genuine Kyoto art, to produce a unique Kyoto experience only found here.
Please enjoy your valuable stay.

The entrance hall welcomes guests with the serenity of traditional Japanese temples and gardens, which allows visitors to experience the atmosphere of Kyoto. The combination of ceramic tiles spread across the floor, moss growing in the garden, along with a portrait of the Thunder and Wind Gods set in a jet-black background, imitates a quiet temple atmosphere. Please enjoy your stay in this one-of-a-kind accommodation that embodies the serenity of Kyoto.

Upon opening the door, the semi-open-air bathroom connects directly to the garden. Regardless of the season, it invites guests to an experience of superb healing.
The bathtub is prepared from Shigaraki ware, which warms the body core with a far-infrared ray effect.

Toto Akihiko from the traditional paper karakami craft shop “Karachō,” established 400 years ago, has created an art piece that is hung up in the bedroom to wish guests good luck. The art is a deep blue that invites guests into a comfortable sleep.

Luggage delivery service from/to JR Kyoto Station is available. Convenient for those who arrive earlier or go for sightseeing before checking in.(charged)

Short walk to subway and bus stop to almost all major sightseeing spots. 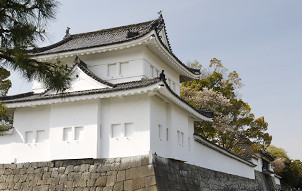 Nijojo castle was constructed in 1603 as a residence and administrative center for Tokugawa Ieyasu, the first shogun. It was completed in 1626 during the reign of Iemitsu, the third shogun. In 1867, the palace was the stage for the declaration by Yasunobu, returning the authority to the imperial court. It is one of the seventeen Historic Monuments of Ancient Kyoto. 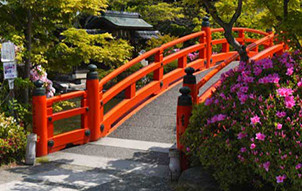 Shinsen-en is an Imperial Garden which was the site of numerous aristocratic gatherings during the Heian period. It is said that a prominent monk, Kukai prayed and a miracle occurred. Since then, monks have competed by praying for rain. In addition to the large pond and island, there are a number of historic structures. It is said to be the oldest existing garden in Kyoto. 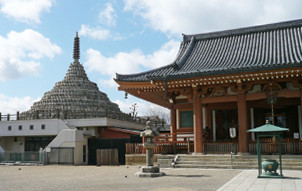 Mibu dera is a Buddihist temple and was established in 991 by the monk Kaiken. Several times a year, the temple hosts performances of Kyogen, a form of traditional Japanese comic theater. It is a pantomime without any words at all but easy to understand. 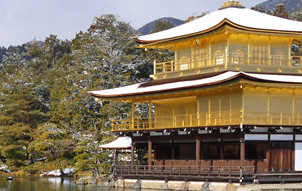 Kinkakuji, literally “temple of the golden pavilion” officially named Rokuonji. It is a Zen Buddhist temple which is completely covered in gold leaf. The temple was the retirement villa of the shogun Ashikaga Yoshimitsu. It is one of the most popular buildings in Japan also designated as a National Special Historic Site. 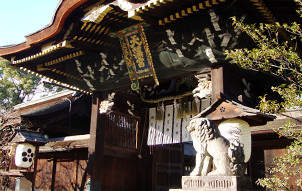 The shrine was first built in 947. It appeases the anger spirit of bureaucrat, scholar and poet Sugawara Michizane, who had been exiled by his enemies in the Fujiwara clan. He was also known as a God of Learning. On the 25th of every month, the shrine hosts a flea market. 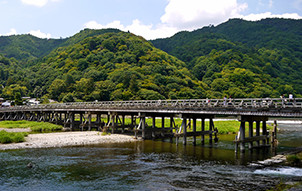 Arashiyama is a nationally designated Historic Site and Place of Scenic Beauty. It has many notable tourist sites in the neighborhood so it is well worth a visit. The view of cherry blossom and autumn colors are very popular. 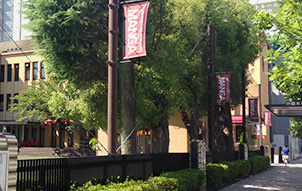 The building is the former elementary school. Its collection of 300,000 items includes Meiji period magazines. You can take down manga from ‘manga wall’ and read freely. In front of the museum, there is a large lawn where people enjoy reading manga from the collection, some lying on the lawn on the nice days. 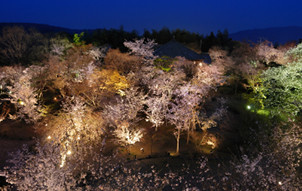 Shoren-in is a Buddihist temple which was built in the late 13th century It is also known as Awata Palace. The temple complex contains a garden with massive eight hundred-year-old camphor trees. It is located in several other prominent temples and shrines in the neighborhood. 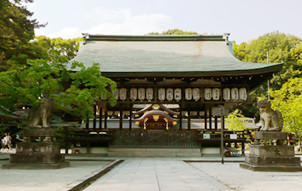 Imamiya jinja is a Shinto shrine which was originally established for patrons to pray for safety from epidemic during the Heian Period in 994. Nowadays people pray for general good health. There are long standing restaurants outside of East Gate. Their specialty is aburi-mochi-skewed roasted rice cakes that are a traditional Kyoto confection.